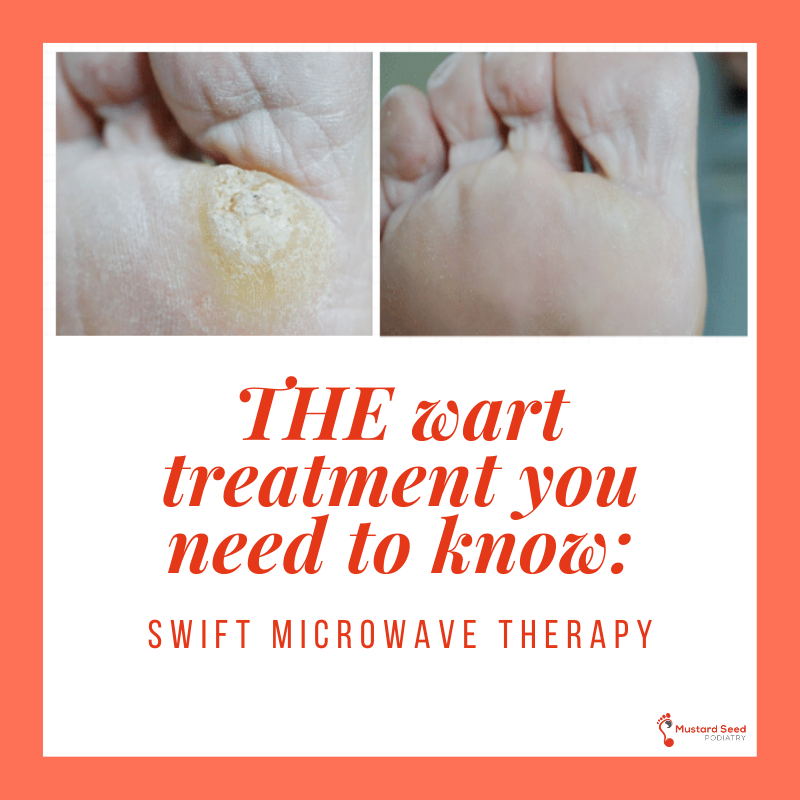 Yup, you saw it right. We wrote MICROWAVE. Now, you must be thinking to yourself, “so, should I put my foot in the microwave?” No. No, please don’t do that. If you are reading this article now, chances are you either are battling with wart yourself, or you know someone who is, and on the search for some wart treatment. Then, look no further, read on and see whether Swift Microwave Therapy is for you!

Wart (a.k.a. plantar wart when occurring in the foot) is a lesion located in the most superficial layer of the skin called epidermis. Epidermis consists of skin cells called keratinocytes. Normally, our skin is a great barrier to foreign, harmful substances, including virus, bacteria and fungus. But, if, for some reason, there is a small opening in the skin, that creates a portal of entry for these harmful substances to enter into the skin.

Warts form when human papilloma virus (HPV) enters the skin via any openings in the skin. The virus invades the skin cells (hosts), then gets comfortable and establishes blood supply network for itself within the host. The virus is also very good at dodging the surveillance of the body’s immune system, making them highly difficult to get rid of.

What are the symptoms of wart?

A wart can sometimes get mistaken as a corn, and vice versa. Both wart and corn look like hard skin and can cause pain. But, a wart can look crusty and resemble the appearance of a cauliflower. Also, upon removal of the top layer of the hard skin, a wart often has pin-point bleeding and the presence of some round white tissues.

So, what’s Swift Microwave Therapy and how can it get rid of wart?

Swift Microwave Therapy is a wart treatment that works by triggering an immune response from the body and promoting the release of interferons, which are natural anti-viral cells.

Swift Microwave Therapy delivers a precise dose of energy, that is consistent every single time, into a predetermined depth of the skin. This heats the infected skin cells to 42°-45°C. Microwaves agitate the water molecules in skin cells (btw, skin cells have a high water content). The water molecules vibrate and collide into each other, generating heat. That’s how the skin cells are heated to the target temperature.

Once the skin cells reach 42-45 degrees celsius, the virus releases heat shock proteins as a stress response (imagine that as the virus screaming for help). Now, in the epidermis, there are actually some guys from the immunity department called Langerhans cells (LCs in short). LCs recognise the presence of heat shock proteins and signal to the immune system that something is wrong (that’s LCs reporting to the headquarter).

Upon receiving the report, the body starts making cytotoxic T cells (you can tell by their name that they aren’t to mess with). These cells then head to the infected site. Cytotoxic T cells get to work and attach themselves to the infected skin cells. Once attached, they launch a programmed cell death (a process called apoptosis) of the skin cells. AND, BOOM. Together with its host, the virus is eliminated, and your wart is gone!

How often and how many treatments will I need?

Standard treatment protocol for Swift Microwave Therapy is 3 sessions, 4 weeks apart. Throughout the course of the treatment, you should notice an improvement of the wart. Complete resolution usually happens around 6-12 weeks after the final treatment.

During a treatment session, an applicator is placed directly on top of the wart, microwaves are delivered into the wart tissue at 2-second intervals for 5-10 times depending on the level of power we use for each application.

If you have multiple warts, then there will be multiple rounds of the above process.

Is the treatment painful?

We tried it on ourselves, and yes, there was some discomfort. You can expect to feel a bit of heat during the 2-second application, but the discomfort quickly dissipates once the application stops. Because microwaves go into a predetermined depth of the skin, there is no burn/cut/breaking of the skin. In other words, you won’t get charred spots on your foot from the treatment!

Is there any downtime?

No, there is not at all. You can go back to your daily routine right after the treatment. There is no dressing, no home treatment, no scarring.

Success rate of this wart treatment?

Due to the stubborn nature of warts, many treatments yield a low success rate. On top of that, treatments are often very lengthy, which is frustrating for both the patients and practitioners.

Swift Microwave Therapy has approximately 83% success rate. It is by far the most advance and clinically proven wart treatment out there. And, we feel like celebrating!

Thinking this might be the right wart treatment for you?

Book an appointment and have a chat with our podiatrist. Ask us any questions you may have. You will be certain whether this is the right treatment for you then!

Last but not least, some photos for thought…(WARNING: pictures of real plantar warts!)

As you can see, the actual number of treatment varies in real life. While 3 treatments is a standard approach, there are still exceptions to the rule, depending on how old the wart is, how many there are, strength of immune system, etc.

Ingrown Toenail – 3 Tips for Avoiding Getting One

Cracked heels? Here is what you should do

Let’s talk feet: ankle sprain & what to do about it